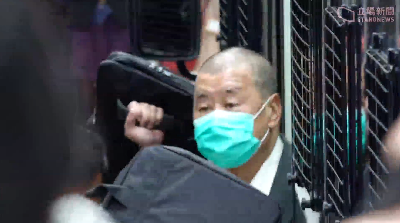 A Hong Kong court has sentenced media tycoon Jimmy Lai and seven other pro-democracy figures to up to 14 months behind bars for participating in an unauthorized assembly last year to commemorate the Tiananmen Square crackdown.

Lai, the founder of the now-defunct Apple Daily newspaper, was sentenced to 13 months in prison at the District Court for inciting and participating in the peaceful candlelight vigil on June 4 last year, which authorities declared illegal. He had earlier pleaded not guilty.

Although he faces multiple charges under Hong Kong's national security law, Monday's charges were not under the controversial legislation.

The Hong Kong Alliance in Support of Patriotic Democratic Movements of China has organized the candlelight vigil in the city's Victoria Park every year since 1990. But authorities banned the event for the first time last year, citing coronavirus risks.

The alliance disbanded in September this year, after police arrested several of its leaders on national security grounds.

During the mitigation hearing on Monday, Lai said he decided to light a candle that day to remind the world of those who died for justice and truth at Tiananmen Square in 1989, according to public broadcaster Radio Television Hong Kong.

In May, the court also sentenced Joshua Wong and three other activists to up to 10 months in prison over their involvement in the same rally.

Hong Kong is the only place on Chinese soil where a mass annual vigil has been held to mark the bloody crackdown in and around Tiananmen Square on June 4, 1989.

The event remains one of the most tightly censored topics in mainland China, with discussions of it scrubbed from mass media. Chinese authorities have not released an official death toll, but estimates range from several hundred to thousands.

That any commemoration could be held in Hong Kong was often seen as iconic of the city's autonomy from China, a litmus test for political freedoms in the special administrative region.

However, the introduction last year of a national security law -- which criminalizes secession, subversion and collusion with foreign forces with a maximum penalty of life imprisonment -- has forced the group behind the June 4 vigil to disband, after authorities arrested several of its leaders under the law.