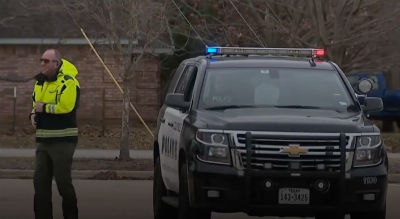 U.K. terrorism police announced Thursday that two more individuals have been arrested in connection to investigations into the Texas synagogue hostage incident over the weekend.

The U.K. terrorism police said they are continuing to "support U.S. authorities with their investigation into the events in Texas," and will further "liaise with and support colleagues from other forces."

Several reports said the two teens detained had been Akramâs sons, but police have not confirmed. Terrorism police also searched an address in North Manchester as part of their investigation.

"Communities Defeat Terrorism, and the help and support we get from the public is a vital part of that," Greater Manchester Police said in a statement. "So, we would urge everyone to remain vigilant, and if you do see anything suspicious then please report it, in confidence, to police via the Anti-terrorist hotline or gov.uk/ACT. It wonât ruin lives, but it may well save them."

Rabbi Charlie Cytron-Walker â who said he threw a chair at Akram during the nearly 11-hour standoff Saturday so he and three other hostages could reach safety â is expected to speak at an event hosted by the Anti-Defamation League Thursday. FBI Director Christopher Wray is also to speak.

Though Akram died at the scene, the FBI has extended investigations to London and Tel Aviv to determine if the suspected gunman acted alone or as part of a larger terror cell. He was heard on the synagogueâs Facebook livestream demanding the release of Aafia Siddiqui, a Pakistani national imprisoned in Fort Worth for trying to kill U.S. troops in Afghanistan, also dubbed "Lady Al Qaeda."

During the Texas standoff, Akram reached out to New York City-based Rabbi Angela Buchdahl, who runs Reform Judaism. The rabbi told her congregation she had no prior connection to the gunman, who wanted her to use her influence to persuade authorities to release Siddiqui from prison in Fort Worth.

Mendoza also pointed to radicalization in Muslim communities in the U.K., particularly in Blackburn, an industrial town in Lancashire, England, where Akramâs Pakistani parents raised their six sons.

Investigators continue to determine how Akram â who had a criminal record stretching back decades, including theft and harassment convictions, and who was on the U.K.âs terror watch list for his extreme beliefs â managed to travel to the U.S., reportedly landing at New Yorkâs JFK airport late last year.

Akram stayed at Dallas-area homeless shelters in the days before the hostage incident, and one pastor told media outlets he handed over video and photos to the FBI after witnessing Akram "dropped off" at one facility by a man who hugged him and appeared to know him.