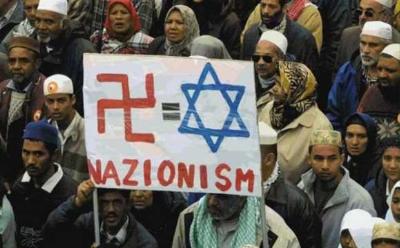 A protest at the Durban Conference in 2001 (File photo)
"Italy and Croatia joined 12 other countries in boycotting this monthâs event marking 20 years since the World Conference Against Racism in Durban, South Africa, due to antisemitism at the conference and anniversary events.

The Durban IV conference is set to be held on the sidelines of the UN General Assembly in New York this month.

The 2001 Durban Declaration singled out Israel as racist. At the parallel NGO forum, activists disseminated copies of the antisemitic conspiracy theory The Protocols of the Elders of Zion, flyers saying Hitler was right and other materials featuring Jew-hatred.

Former Iranian president Mahmoud Ahmadinejad denied the Holocaust at the 2009 Durban Review Conference, where he called it a âpretextâ for Israel to oppress Palestinians. He was invited back to Durban III in 2011, where he did the same.

Croatian news site Vecernji said the country will not participate in Durban IV because of 'the constant antisemitic attitudes and the linking of conferences to anti-Israel propaganda and the promotion of intolerance.'

Italy has also opted out of the conference due to its antisemitism, the Italian embassy in Israel confirmed.

Countries that boycotted Durban conferences in the past but have yet to state their position this year are Poland and New Zealand. Israel and Poland are currently in a diplomatic dispute over a new Polish law making it nearly impossible for Holocaust survivors and their descendants, as well as other people whose property was confiscated by the communist regime, to get restitution."
Date
September 8, 2021
Title
Italy, Croatia bring countries boycotting Durban conference to 14, The Jerusalem Post
Author(s)
Lahav Harkov
Original Source
https://www.jpost.com/diaspora/antisemitism/italy-croatia-bring-countries-boycotting-durban-conference-to-14-678964
Attachment
Click here to view this article in MS Word/PDF format