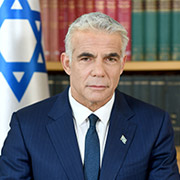 'We think that in the coming year, there will be debate that is unprecedented in its venom and in its radioactivity around the words âIsrael as an apartheid state,'' Lapid said during a Zoom briefing with Israeli journalists.

Lapid pointed at Palestinian campaigns against Israel in the International Criminal Court and the International Court of Justice in The Hague, and the UN Human Rights Councilâs establishment of a permanent âCommission of Inquiryâ â the most potent tool at the councilâs disposal â into Israelâs treatment of Palestinians, including Operation Guardian of the Walls in May 2021.

Lapid pointed out that the COI has a budget of $5.5 million with 18 staffers. By contrast, the COI looking into the Syrian Civil War has an annual budget of about $2.5 million and 12 staffers.

'It shows where it is heading,' he said, stressing that the campaign by the Palestinian Authority and anti-Israel organizations could affect Israelâs ability to participate in international cultural and sporting events, among other challenges.

Lapid called the accusation that Israel is an apartheid state 'a despicable lie.'

Israel has long adamantly denied accusations of apartheid, saying its Arab minority enjoys full civil rights, as well as the term 'occupation' to describe its activities in the West Bank and Gaza. It views Gaza, from which it withdrew soldiers and settlers in 2005, as a hostile entity ruled by the Islamic terror group Hamas, and it considers the West Bank to be disputed territory subject to peace negotiations â which collapsed more than a decade ago.

In May 2021, shortly after the end of the 11-day conflict between Israel and Hamas in Gaza, the top United Nations human rights body created an open-ended international investigation into Israelâs treatment of Palestinians, after the UN rights chief said Israeli forces may have committed war crimes and faulted the Hamas terror group for violations of international law.

The resolution called for the creation of a permanent Commission of Inquiry to monitor and report on rights violations in Israel, the Gaza Strip and the West Bank. It will be the first such COI with an 'ongoing' mandate..."
Date
January 3, 2022
Title
Lapid: 2022 will see intense effort to paint Israel as apartheid state, The Times of Israel
Author(s)
Lazar Berman
Original Source
https://www.timesofisrael.com/lapid-2022-will-see-intense-effort-to-paint-israel-as-apartheid-state/
Attachment
Click here to view this article in MS Word/PDF format