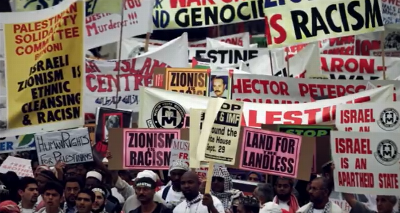 Protesters at the 2001 Durban Conference (File photo)
"In 2001, anti-Israel and anti-Zionism sentiment roared with a vengeance at the UN World Conference against Racism, Racial Discrimination, Xenophobia and Related Intolerance held in Durban, South Africa (the Durban Conference). As president of Bânai Bârith International and as chairman of the United Nations Committee of the Conference of Presidents of Major American Jewish Organizations, I served as head of the delegation for those organizations to the Durban Conference, a true hatefest toward Israel, Zionists and the Jewish people.

Indeed, it was at Durban, which occurred during the Second Intifada, that the seeds of hate were planted to launch a malicious, multi-pronged diplomatic, academic, legal and economic boycott, and campaign of demonization against Israel in the court of public opinion.

Intended to explore ways to end racism and promote awareness of intolerance, the Durban Conference quickly devolved into a public display of anti-Jewish rhetoric and an ugly anti-Israel agenda. Copies of the antisemitic Protocols of the Elders of Zion were sold on the conference grounds, and anti-Israel protesters resurrected the âZionism equals racismâ charge, further demonizing Israel and the Jewish people in every possible way.

Both at the official UN member conference in Durban and the NGO Forum that aimed to âpublicize the voice of the victims,â blatant antisemitic hate toward Israel was rampant. The forum consisted of tables, posters and people working to rile up the crowd with images that made it very clear that they considered Israel to be an apartheid Nazi racist criminal state unworthy of standing at the United Nations or equality in the family of nations, notwithstanding Israelâs member-state status at the UN.

At this forum, the Jewish Caucus proposed and is believed to have cast the only vote in favor of labeling Holocaust denial and anti-Jewish violence as forms of antisemitism. In addition, the forum and conference representatives rejected efforts by the US and other democratic allied governments to seek the inclusion of a key paragraph on antisemitism in the final outcome document of the conference.

After four days in which the US attempted to end the blatantly antisemitic attitudes and displays of hatred toward Israel, Zionists and the Jewish people, the US and Israeli delegations, along with the Jewish NGO organizations, held a press conference and staged a walkout in protest.

I am proud to have led that walkout along with Lord Janner of the Board of Deputies of British Jews and leaders of the various Jewish NGOs present at the UN Conference Forum, joined by the US and Israeli ambassadors and delegations. It is important that the Jewish people stand together in such times and circumstances; and important that we speak out with dignity in protesting the injustices of false accusations and outright hatred toward Israel and the Jewish people.

The final resolution of the NGO Forum called Israel âa racist apartheid state,â guilty of the âsystematic perpetration of racist crimes including war crimes, acts of genocide and ethnic cleansingâ¦ and state terror against the Palestinian people.â This document is wrongly heralded as a guideline for action against Israel. It is a manifesto to be rejected, not commemorated.

In 2009, in Geneva, as head of the delegation for the Durban Review Conference, I witnessed the continuation of hatred toward Israel, Zionism, and the Jewish people, which further advanced the Durban agenda of castigating Israel in every possible avenue and venue.

WHAT OCCURRED on the grounds of the United Nations conference in Durban and at the recent âDurban IVâ commemoration, was not by chance, but rather was a well-planned and designed gathering with the purpose not of standing against racism, but rather of singling out and accusing Israel as an apartheid criminal racist state. Understanding the absurdity of this charge and the depravity behind its origins, 38 countries boycotted the Durban IV event. Nevertheless, both the UN General Assembly and Human Rights Council have in recent days passed resolutions continuing to endorse the Durban Program, tacitly applauding rather than castigating the hatred espoused there.

Over the past 20 years, the enemies of Israel and the Jewish people have followed that line, taking to the International Court of Justice a request, via the United Nations General Assembly, for an advisory opinion on the âlegalityâ of Israelâs construction of the âwall,â which is truly a terrorism prevention security fence, and taking to the International Criminal Court the issues of Israelâs neighborhoods and communities in the ancient homelands of the Jewish people, further accusing the IDF of violations of international law with regard to the IDFâs military response to the kidnapping and murder of Jewish teenagers and civilians in the West Bank.

Those of us who attended Durban and experienced the rampant hatred toward Israel and the Jewish people must remind others of the need to stand up against such hatred and do so with pride, strength and knowledge; and do so with a commitment to making our voices collectively heard around the world, as Bânai Bârith International recently did in its highly acclaimed series Durban Revisited, broadcast by JBS TV.

The legacy of Durban must be recognized as one of hate, not of tolerance nor of a commitment to advancing education, democracy, equal rights and respect for the dignity of all people."
Date
October 25, 2021
Title
The Durban Conference perpetuates hate – opinion, The Jerusalem Post
Author(s)
Richard Heideman
Original Source
https://www.jpost.com/bds-threat/the-durban-conference-perpetuates-hate-opinion-683075
Attachment
Click here to view this article in MS Word/PDF format