The U.N. continues Israel-bashing after Biden promised to stop it 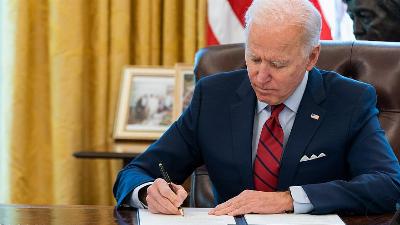 President Joe Biden (File photo courtesy social media)
"When the Biden administration last year reversed its predecessorâs decision to abandon the UN Human Rights Council, Secretary of State Antony Blinken pledged his team would use diplomatic engagement to stop its focus on delegitimizing Israel. That promise remains unfulfilled â and the administration stands on the verge of complicity in UN-sponsored anti-Semitism.

After Hamas terrorists rained down thousands of rockets on Israeli civilians last year, forcing the democratically elected Israeli government to respond militarily to defend its citizens, the Human Rights Council voted to establish a commission of inquiry into Israel.

It has a mandate not just to compile alleged human-rights abuses but to concoct a body of so-called evidence to buttress broader anti-Semitic efforts to label racist the very notion of a Jewish state.

Why does the mandate rise to the level of anti-Semitism? It meets the criteria of the US State Department-adopted International Holocaust Remembrance Allianceâs working definition. The alliance cites two prime examples of modern anti-Semitism: âclaiming that the existence of a State of Israel is a racist endeavorâ and âapplying double standards by requiring of it a behavior not expected or demanded of any other democratic nation.â

The Human Rights Council has long applied a double standard to Israel â the only country for which it has a dedicated agenda item. But its new commissionâs mandate goes even further, aiming to produce a UN document that countries can cite to justify anti-Semitic claims that Zionism is racism.

And, unlike the mandates of other commissions of inquiry, which the council must renew annually, this one comes without an expiration date.

To its credit, the Biden administration recognizes the commissionâs appalling nature. When late last year the UN General Assembly considered the commissionâs budget, including millions of dollars and dozens of staff, Washington spoke out in opposition. But it turns out an engagement-only strategy at the United Nations doesnât work. The UN in December handed the commission $4.2 million, and America officially joined the Human Rights Council days later, pledging to use its membership and influence to terminate the commissionâs mandate.

Despite congressional calls to follow through, Team Biden hasnât met its promise. When the council met in March, Washington was understandably distracted by Russiaâs invasion of Ukraine â and mustering diplomatic support to suspend Moscow from its seat on the council. The Biden administration celebrated a diplomatic victory â but at what cost? That same session, the council passed four anti-Israel resolutions and left the commissionâs mandate untouched.

This month, the commission published its first report, which largely rehashed previous UN denunciations of Israel. The absence of fresh analysis likely reflects circumstantial limitations: The UN had approved the commissionâs budget and staff only a few months prior. The commission vows its investigation is about to expand to âpreserve and analyze information and evidence on international crimes with a view to identifying those bearing individual criminal responsibilityâ and âensuring individual, State and corporate accountability.â

Bidenâs ambassador in Geneva this week issued a statement, with 21 other countries, denouncing the report. But words alone wonât derail the commission; that requires a resolution passed by the 47-member council.

With China continuing a genocide in Xinjiang and Russia committing crimes against humanity in Ukraine, the council shouldnât devote precious resources to widen an anti-Semitic probe. Itâs time for the Biden administration to make good on its promise to seek reform by putting forward a resolution this month to terminate the commissionâs mandate.

The administration, unfortunately, has signaled it may not leave the council even if the mandate continues, claiming the body âplays a crucial role in promoting respect for human rights as well as fundamental freedoms all around the world.â

Tell that to the Uighurs of Xinjiang, the Tibetan people and the citizens of Hong Kong, particularly in the wake of UN human-rights chief Michelle Bacheletâs much-criticized visit to China, in which Beijing media quoted her praising the Communist Partyâs work to alleviate poverty and calling its role within international institutions âcrucial.â

Thereâs no shame in admitting the Human Rights Council is broken beyond repair. Blinken could take credit for trying his best to end its systemic anti-Semitism â even if his strategy was naÃ¯ve and the effort doomed from the start.

But if the Biden team fails to terminate the commissionâs mandate this month, it will have to face the realization that its continued presence in the council would make the United States complicit in UN-sponsored anti-Semitism and erode Americaâs moral leadership in combating this global scourge."
Date
June 14, 2022
Title
The U.N. continues Israel-bashing after Biden promised to stop it, The New York Post
Author(s)
Richard Goldberg
Original Source
https://nypost.com/2022/06/14/the-un-continues-israel-bashing-after-biden-promised-to-stop-it/
Attachment
Click here to view this article in MS Word/PDF format