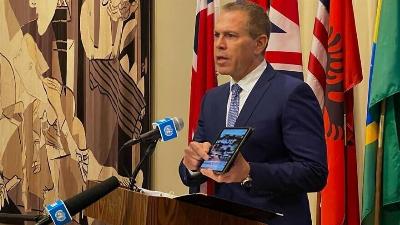 Israeli Ambassador to the U.N. Gilad Erdan explaining Israel's lack of involvement in Islamic Jihad's failed launches in the Gaza Strip. (Photo courtesy Israel's Mission to the U.N,)
"The UN must reinstate the head of the United Nations Office for the Coordination of Humanitarian Affairs in the Occupied Palestinian Territory, after she was dismissed for tweeting dismay at âindiscriminate rocket fireâ by Palestinian Islamic Jihad, Israeli Ambassador to the UN Gilad Erdan said Sunday.

OCHA head Sarah Muscroft tweeted last Monday that she was ârelieved to see a ceasefire agreed ending hostilities impacting both Palestinians and Israeli civilians. Such indiscriminate rocket fire of Islamic Jihad provoking Israeli retaliation is condemned. The safety of all civilians is paramount â the ceasefire must be upheld.â

Under pressure from pro-Palestinian activists who claimed Muscroft was blaming Palestinians for Operation Breaking Dawn, which began with Israeli strikes against an Islamic Jihad cell in Gaza the IDF said was planning to fire anti-tank missiles across the border, the UN staffer deleted her tweet a day later...

In a letter to UN Secretary-General Antonio Guterres, Erdan said that firing Muscroft over the tweet âeffectively grants the Palestinian players and the local UN staff an âunwritten vetoâ over UN statements, and stands in clear contradiction with the basic principles of objectivity and neutrality that the UN claims to hold.â

âThis represents a clear surrender of the UN to threats and intimidation, and poses a very problematic norm,â he added.

The ambassador pointed out that last year, Matthew Schmale, a representative of UNRWA, the UN agency for Palestinian refugees, said in a televised interview that âthere is a huge sophistication in the way the Israeli military struck over the last 11 days,â to try to avoid civilian casualties.

Following a Palestinian backlash, Schmale apologized and was recalled from his post.

At the same time, Erdan recalled, Miloon Kothari, a member of the UN Human Rights Councilâs Commission of Inquiry on Israel said, âWe are very disheartened by the social media that is controlled largely by â whether it is the Jewish lobby or specific NGOs.â

Erdan said Kothariâs comments were âa clear case in which a UN official who clearly breached the principles of impartiality and neutrality required from a member of an HRC Commission of Inquiry used clear antisemitic vicious parlance, and yet still maintains his position.â