UK Says It Will Make Hamas a Banned Terrorist Organization 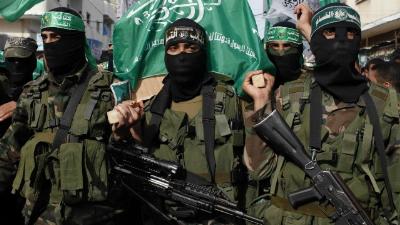 Hamas terrorists (File photo courtesy Wikimedia Commons)
"The British government said Friday that it intends to ban the Palestinian militant group Hamas as a terrorist organization, saying it will no longer differentiate between the group's political and military wings.

The military arm of Hamas has been outlawed in the U.K. since 2001 but the organization as a whole is not proscribed.

Home Secretary Priti Patel, who is in charge of law and order issues, said she would proscribe the group 'in its entirety, including its political wing.'

'This is an important step, especially for the Jewish community,' Patel said during a speech in Washington. 'Hamas is fundamentally and rabidly antisemitic.'

Patel said the group had 'significant terrorist capability, including access to extensive and sophisticated weaponry, as well as terrorist training facilities.'

A ban, which must be approved by Parliament, would make it illegal in Britain to be a member of Hamas or to express support for the group, including by flying its flag or wearing a T-shirt to that end. The maximum penalty would be 14 years in prison.