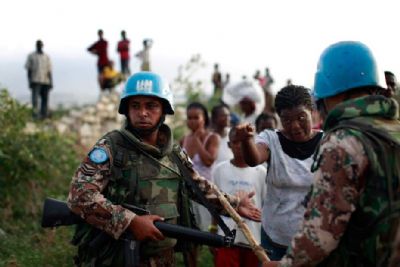 UN peacekeepers in Haiti (File photo)
"The stain of sexual abuse allegations against United Nations peacekeepers resists removal three years after sickening reports of soldiers' predatory behavior in the Central African Republic (CAR). That much is clear from an internal report detailing the glacial bureaucracy in investigating, reporting and tracking these horrific accusations.

What remains unclear is whether the U.N. is ever going to eradicate this longstanding cancer that has infiltrated peacekeeping forces in CAR, Haiti and elsewhere.

The 23-page report from the U.N.'s Office of Internal Oversight Services documents a lackadaisical regard not just in prosecuting allegations of abuse but also in providing basic assistance and safety for victims. More than half of the 37 U.N. bases in CAR have been flagged for potential problems, The Washington Free Beacon reports.

Meanwhile the leadership of the CAR peacekeeping force (known as MINUSCA) still hasn't produced a system that encourages victims to resist and report sexual abuse in what's been called a 'culture of impunity,' according to Fox News.