The UN Is Training the Next Wave of Anti-Israel 'Journalists' 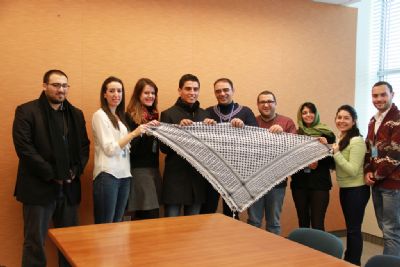 UNDPI Palestinian Media Trainees (File photo)
"Did you know that there is a shortage of Palestinian journalists who want to use their skills to help the 'resistance'?

According to the UN, there is.

If you look at previous year's trainees, you see a theme emerging:

'Mohammad Alazzaeh's first photo was of a boy standing on the roof of his house, pointing a plastic gun at the Israeli soldiers attacking the refugee camp. ...He dedicates his time to teaching children in the camp photography skills so that they can learn a new form of resistance.

Osama [Awwad] ... admits that sometimes other journalists criticize him and accuse him of trying to divert attention from reality, but he believes what he is doing is a different form of resistance.

Sabreen Taha: 'I believe that documenting and sharing the old architecture, culture and customs [of Jerusalem] is a form of resistance and respect.'

If these so-called 'journalists' consider their jobs to be 'resistance,' then they are not journalists â but anti-Israel activists...

The UN is paying to train the next generation of anti-Israel activists under the guise of journalism. To put it another way, they are training UN journalists.

And this is just one of the dozens programs in every nook and cranny of the UN that is used to harm Israel."
Date
May 1, 2016
Title
The UN Is Training the Next Wave of Anti-Israel ‘Journalists’, The Algemeiner
Author(s)
Elder of Ziyon
Original Source
http://www.algemeiner.com/2016/05/01/the-un-is-training-the-next-wave-of-anti-israel-journalists/
Attachment
Click here to view this article in MS Word/PDF format