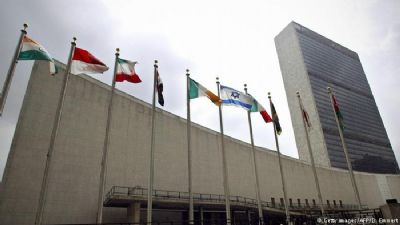 The Israeli flag in front of the United Nations headquarters in New York.
"Israel will suspend a significant portion of its annual contributions to the United Nations for 2017 in the aftermath of Security Council resolution 2334 condemning Israeli settlement activity, the Israeli mission to the UN informed the international body on Friday.

The cut, amounting to some six million dollars, is described as 'an act of protest' and symbolically represents the portion of the UN budget allocated to anti-Israel bodies including: The Committee on the Exercise of the Inalienable Rights of the Palestinian People; The Division for Palestinian Rights; The Work of the Special Committee to Investigate Israeli Practices; and Special Information Programme on the Question of Palestine of the UN Department of Public Information...

According to Danon, 'now is the time to implement real change at the UN.' He added that Israel seeks to 'stop the practice where the UN is used solely as a forum for unending attacks against Israel' by encouraging structural changes.

The Ambassador further explained that the suspension of Israel's funding is 'only the first in a series of steps under consideration by the Foreign Ministry and the Israeli Mission in reaction to the recent Security Council resolution.'