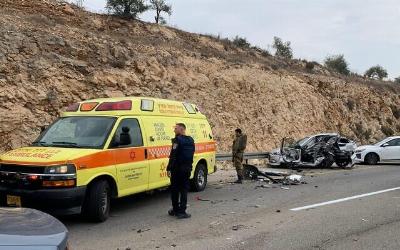 Medics at the scene of a terror attack near the West Bank settlement city of Ariel, November 15, 2022. (Magen David Adom)

Two Israelis were killed and four were hurt in a stabbing and car-ramming attack in and around the West Bank settlement of Ariel on Tuesday morning, the military and medics said.

According to the Israel Defense Forces, a Palestinian terrorist stabbed a security guard and another person near the entrance to the Ariel Industrial Park. He then stabbed two people at a nearby gas station and fled in an apparently stolen vehicle.

Shortly afterward, the terrorist crashed the vehicle into other cars on the Route 5 highway, before getting out and stabbing another person, according to medics. He then stole another vehicle and crashed into cars on the highway again, before he got out and was shot dead by a soldier.

The Magen David Adom ambulance service said the 36-year-old security guard was seriously hurt, and the other man stabbed near the industrial zone entrance was in critical condition.

The Beilinson Hospital in Petah Tikva said it was treating three victims in serious condition, one of whom was unstable.

A person initially reported by medics to have been a second attacker was one of the victims. The military said troops were dispatched to the scene and were searching the area for a suspect who allegedly aided the terrorist.

The attack came amid an Israeli anti-terror offensive mostly focused on the northern West Bank to deal with a series of Palestinian attacks that have left 26 people in Israel and the West Bank dead since the start of the year.

The operation has netted more than 2,000 arrests in near-nightly raids, but has also left over 130 Palestinians dead, many of them, but not all, while carrying out attacks or during clashes with security forces.