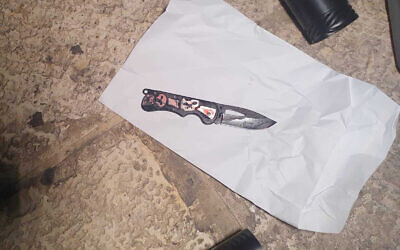 The knife used in a stabbing attack in Jerusalem, November 17, 2021. (Photo courtesy Police)

The assailant, identified by Palestinian media as Amr Abu-Assab, was shot by an armed civilian who was passing by and then again by the Border Police officers heâd attacked. He was pronounced dead at the scene. According to police, Abu-Assab was 16 years old from East Jerusalem.

In graphic video footage from the scene that was released by the police (below), the border guards can be seen walking past Abu-Assab near the Ateret Cohanim Yeshiva in the Old City. Once their backs were turned, the teenager took out a knife and stabbed the male border guard in the head. The female Border Police officer then pushed Abu-Assab away from her partner, pinning him to the wall and grappling with him.

The teenager stabbed her a number of times, including in the head, before the passerby shot him.

In addition to the head wound, the male officer sustained a leg wound after he was struck by a fragment of the bullet fired by the armed civilian.

Following the attack, police conducted raids in the Issawiya neighborhood of East Jerusalem, where Abu Assab was from, making a number of arrests, including the attackerâs parents.

The Hamas terror group praised the attack, calling it a âheroic commando operation,â and claiming Abu-Assab as a member of the organization.

âThis is the latest confirmation that our peopleâs revolution against the occupation will continue until the occupier is swept away,â said spokesperson Hazim Qasim.

Officers sweeping the area after the attack detained several suspects for questioning on suspicion they were connected to the alleged attacker. Jerusalem District Police Commander Doron Turgeman later held a situational assessment briefing at the scene of the attack.