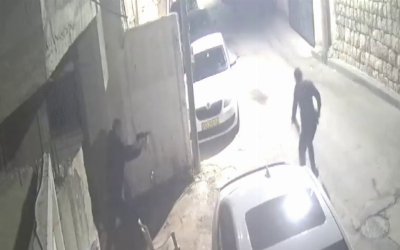 Three police officers were wounded after being rammed by a vehicle in a terror attack in Kafr Qasim, an Arab city east of Tel Aviv, during the pre-dawn hours of Friday morning, law enforcement officials said.

According to police, the assailant, Naim Badir, called police over to a parking area of a building, claiming there had been a violent incident, before pulling out a loaded makeshift submachine gun and attempting to open fire.

Badir then fled into the building after his gun had apparently jammed, police said.

The assailant then hurled Molotov cocktails at a police car. Police said they later found several more firebombs on the roof of the building where Badir had called cops over to.

He then got into his car and rammed it into the officers, lightly wounding three of them.

Officers returned fire, killing the assailant at the scene. A knife was later found in his car.

Police said the incident was a terror attack.

Officers had first been called to the area following reports made by Badir of a domestic violence incident in the Arab-majority city, according to law enforcement officials.

Video released by police showed Badir first attempting to shoot at the officers. The footage cuts before showing the attacker getting into a car and speeding toward the officers, in reverse, and slamming into another vehicle next to the police.

Central District Commander Avi Bitton said after an assessment with various security officials including the Shin Bet security service, âit appears to have been a terror attack planned days earlier.â

Police dispatched reinforcements to the area, including special forces units, and were searching for additional suspects.

Despite the video footage, Badirâs family strongly denied the incident was an attack and accused police of âmurdering our son in cold blood.â

âOur son did not plan any attack,â they said. âItâs a fallacious claim by police to hide its failures in facing crime in Arab society,â a statement from the family said.

A member of Kafr Qassimâs community council told Channel 12 anonymously: âIf thatâs terror then police and the Shin Bet should also call the murder of Firas Heib terror, they should call the murder at the Haifa restaurant terror.â

Mayor Adel Badir said âWe need to wait for the motive [to become clear]â before it is ruled as terrorism.

The incident came amid high tensions and regular clashes between Israeli security forces and Palestinians, with most of the violence taking place within the West Bank.

An Israeli anti-terror offensive has mostly focused on the northern West Bank to respond to a series of Palestinian attacks that have left 31 people dead in Israel and the West Bank since the start of the year.

The operation has netted more than 2,500 arrests in near-nightly raids, and has also left 170 Palestinians dead, many of them â but not all â while carrying out attacks or during clashes with security forces.

On Thursday, a member of the Hamas terror group was killed as Israeli troops clashed with Palestinian gunmen in Nablus.

Earlier this month, a Palestinian rammed a vehicle into a motorist in Tel Aviv. Police prosecutors said Monday they plan to file terror charges against the suspect after an investigation found the motive for the incident was nationalistic.