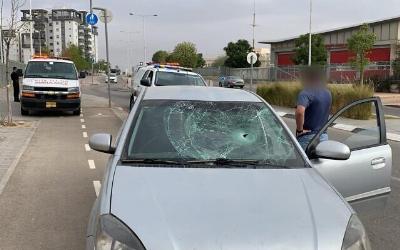 A man is expected to be charged with terror offenses after he allegedly carried out a car-ramming attack that moderately wounded an 18-year-old in the southern city of Beersheba, a court was told Friday.

Amr Alkirnawi, a 39-year-old resident of Rahat, is expected to be charged with a terrorist act of attempted murder, the Beersheba Magistrateâs Court was told by police during a custody hearing. The court ordered Alkirnawiâs detention to be extended for seven days.

The suspect is alleged to have driven his vehicle on the sidewalk near the Israeli Air Force Technological College on Thursday, slamming into an 18-year-old, according to surveillance camera footage and eyewitnesses.

The teen, a student at the college, was taken to Soroka Medical Center in the city in moderate condition.

The driver was arrested some 100 meters away, according to law enforcement officials.

The suspect told reporters that he had lost control of the car while driving and accidentally hit the teenager.

The suspect was later taken to be questioned by the Shin Bet security agency.

While technically not enlisted in the military, students at the IAF college wear uniforms.

Alkirnawi had in recent days published posts on the TikTok video-sharing site claiming he had been threatened by a Jewish Israeli man brandishing a gun in Beersheba.

âNobody can threaten the Bedouins here in Beersheba or in the south. If you respect us we will respect you, and if not you will suffer. This is not a threat, but for our dignity, we are willing to give up our lives,â the suspect said in a rant.

In another clip, as the suspect walked out of a police station apparently after filing a complaint against the man who allegedly threatened him, he called on Bedouins to prepare to defend themselves.

âI call on Bedouins, you need to be prepared at any moment for any threat. Each and everyone should protect themselves in this racist country,â he said.

The Haaretz daily cited people close to the suspect and his family as describing him as unstable.

The suspected attack came amid heightened tensions, and a day after two bombs were detonated at two bus stops near entrances to Jerusalem, killing a teenager and wounding more than 20 others.