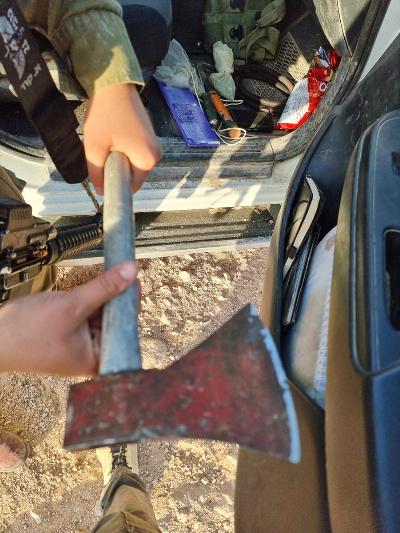 An axe used in the attack (Photo courtesy Twitter)

A group of over 20 Palestinians attacked an Israeli man in the Jordan Valley in the West Bank on Saturday with clubs and stones.

Israel Defense Forces troops responded to the attack near the settlement of Mevoâot Yericho, fired in the air to warn off the assailants and arrested seven suspects, the Kan public broadcaster reported.

Palestinians at the scene clashed with the arriving Israeli troops.

Some of the attackers were armed with knives and hatchets, the report said.

The settler who was attacked had been grazing sheep and received first aid from Magen David Adom first responders at the scene.

He was lightly hurt and refused to be taken to a hospital, MDA said.

The attack followed several other security incidents between Israel and the Palestinians over the weekend.

Early Friday, three Palestinians were killed in a gun battle with IDF troops in the West Bank town of Jenin, sparking outrage among city residents and the Palestinian Authority.

According to the military, the soldiers were fired upon while operating in the northern West Bank city and âneutralizedâ the gunmen who shot at them.

Hamas later claimed Lahlouh as a member, while the affiliations of Abu Srour and Salah were not immediately known.

Early Saturday, Palestinian terrorists fired a rocket toward the southern city of Ashkelon, the first projectile to be launched at Israel from Hamas-ruled Gaza since April.

According to the IDF, the rocket was intercepted by the Iron Dome missile defense system. There were no reports of injuries or damage and no terror group immediately claimed responsibility for the attack.

The IDF later struck targets in the Gaza Strip in response.

Later Saturday, Israel froze a move that would have allowed 2,000 more Gaza workers into Israel, days after it was announced, in response to the attack. The quota of work permits for Palestinians from Gaza will remain at 14,000.

Also Friday, an IDF observation balloon crashed in Gaza under disputed circumstances. Palestinian media reports claimed the balloon was shot down, while the military said it became disconnected from its anchor for unknown reasons.