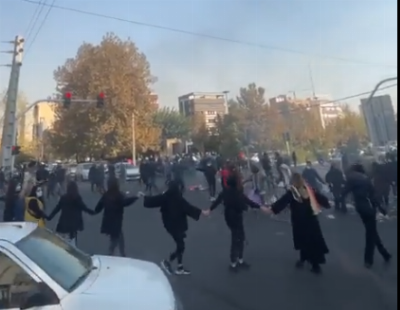 Four people have been sentenced to death on the charge of "enmity against God" in connection with the recent anti-government protests in Iran.

Revolutionary Courts in Tehran said one of the unnamed "rioters" hit and killed a policeman with his car, the judiciary's Mizan news agency said.

The second possessed a knife and a gun, and the third blocked traffic and caused "terror", it alleged.

The fourth was convicted of a knife attack, Mizan reported late on Tuesday.

Human rights activists condemned the death sentences - which brought the total to five since Sunday - saying they were the results of unfair trials.

"Protesters don't have access to lawyers in the interrogation phase, they are subjected to physical and mental torture to give false confessions, and sentenced based on the confessions," the director of Norway-based Iran Human Rights, Mahmood Amiry-Moghaddam, told AFP news agency.

Although the judiciary did not disclose the identities of the five individuals sentenced to death, Amnesty International said information about their charges had led human rights activists to believe they were Mohammad Ghobadlou, Manouchehr Mehman Navaz, Mahan Sedarat Madani, Mohammad Boroughani and Sahand Nourmohammad-Zadeh.

It added that they were among at least 21 detainees charged with security-related offences that are punishable by death under Iran's Sharia-based legal system, including "enmity against God" and "corruption on Earth".

At least 348 protesters have been killed and 15,900 others arrested in a crackdown by security forces on what Iran's leaders have portrayed as foreign-backed "riots", according to the Human Rights Activists News Agency (HRANA), which is also based outside the country.

The women-led protests against clerical rule erupted after the death in custody three months ago of Mahsa Amini, a 22-year-old woman who was detained by morality police for allegedly breaking the strict rules on hijabs.

The judiciary's announcements came after 12 people were reportedly killed amid a fresh wave of unrest that began on Tuesday.

Activists called for three days of demonstrations and strikes to commemorate "Bloody November" - a reference to the deadly crackdown on the last major nationwide protests that began on 15 November 2019, when many Iranians reacted angrily to a sudden increase in fuel prices.

Videos posted on social media on Tuesday showed crowds in Tehran and other major cities chanting slogans against the Supreme Leader, Ayatollah Ali Khamenei, including "death to the dictator".

At a metro station in the capital, protesters set fire to a headscarf on a platform as a crowd shouted that Ayatollah Khamenei "will be toppled".

Another video from a metro station appeared to show officers beating people inside a train carriage, while in a third, people were seen running and falling over as security forces allegedly opened fire.

On Wednesday night, state media reported that at least five people were killed when armed "terrorist elements" opened fire at protesters and police officers at a market in the south-western city of Izeh. The deputy governor Khuzestan province said the dead included three men, a woman and a girl.

Opposition activist collective 1500tasvir also said it had received reports of a high number of casualties in Izeh and accused security forces of killing a 10-year-old boy. It also posted a video that it said showed some protesters setting fire to a seminary in the city.

Earlier, Kurdish human rights group Hengaw reported that a male protester was shot and killed by security forces in the north-western city of Kamyaran, in Mahsa Amini's home province of Kurdistan. He had been standing near the house of another man who was killed by direct fire from security forces on Tuesday, it said. Another two men were also killed in the nearby city of Sanandaj, it added.

Hengaw, which is based in Norway, also said that protesters seized control of the city of Bukan, in neighbouring West Azerbaijan province, on Tuesday night.

State media reported that "rioters" shot dead two members of the Islamic Revolutionary Guard Corps (IRGC), including a colonel, in Bukan and Kamyaran on Tuesday.

They also said that a cleric who was a member of the paramilitary Basij Resistance Force, which is controlled by the IRGC, died after being hit by a Molotov cocktail in the southern city of Shiraz.

State media have so far reported the deaths of 38 security personnel since the protests began. HRANA has put the toll at 43.