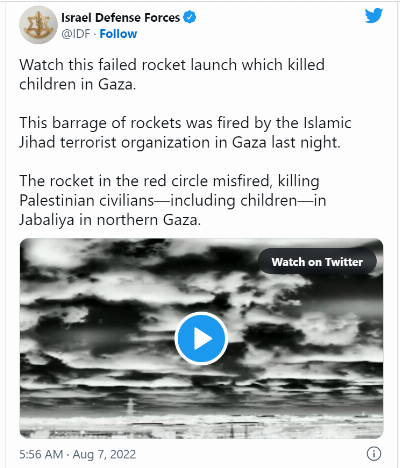 Eight children and teenagers were killed on Sunday in two separate attacks in the Gaza Strip, according to Palestinian reports, but Israel claims they were killed by rockets launched by the Islamic Jihad, which has been fighting Israel from the Gaza Strip since Friday.

According to reports coming out of the Jabalya refugee camp in the northern Gaza Strip, five young Palestinians â aged four, 13, 14, 16 and 17 â were killed in an attack on a local cemetery. Four of the dead were family members...

On Saturday, four Palestinian children were killed in a strike near a mosque in northern Gaza. Hamas and the Palestinian media blamed Israel for the killing of the children, aged five, nine, 10, 11 and 19.

The Israeli military said that it did not carry out any strikes on Jabalya Refugee Camp at the time, adding that the deaths were caused by an errant Islamic Jihad rocket.

"We have videos that prove beyond doubt that this is not an Israeli attack," the head of Israel's public diplomacy said.