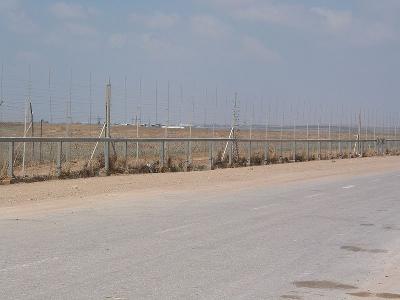 An Israeli civilian was injured from gunfire Wednesday near the border with Gaza, the Israel Defense Forces said, drawing retaliatory strikes in the Strip.

Several Hebrew media outlets reported that the Israeli was injured by sniper fire originating in Gaza.

The man was taken to Barzilai hospital in Ashkelon with light injuries to his leg, the military said.

According to the hospital, the 33-year-old was struck by shrapnel as he worked on an ATV near Kibbutz Nahal Oz.

He is a worker for a civilian firm hired by the Defense Ministry for maintenance of the recently completed security barrier separating Israel and the Palestinian enclave, it added.

The army ordered farmers to stay away from land near the Gaza border.

The Hamas-run Gaza Health Ministry said three Palestinians have been wounded. Their identity was not immediately clear.

The incident comes during a relatively quiet time and amid intense efforts to reach a stable, long-term ceasefire following a major escalation of violence in May.

It also comes a day after Palestinian Authority President Mahmoud Abbas met Defense Minister Benny Gantz in the latterâs home in Rosh Haâayin for his first talks with a senior Israeli official inside Israel in over a decade.

Hamas, the terror group that rules Gaza and openly seeks Israelâs destruction, lambasted Abbas over the meeting and called it a âstab in the back.â