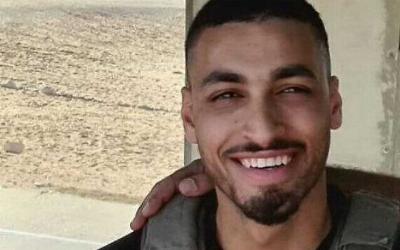 Israeli Border Police officer Barel Shmueli, who was critically wounded in a shooting on the Gaza border on August 21, 2021. (Border Police)

A Border Police officer shot and critically wounded during a riot on the Gaza Strip border was identified as 21-year-old Barel Hadaria Shmueli from Beâer Yaakov in central Israel, police said early Sunday.

Shmueli was shot in the head at point-blank range during major clashes along the Gaza border on Saturday.

He was sent to the trauma center at Beershebaâs Soroka Medical Center for treatment and immediately underwent emergency surgery, the hospital said. Overnight his condition improved from critical to serious, and he remained in the hospitalâs intensive care unit, unconscious and connected to a ventilator, a hospital spokesperson said.

The statement said that Shmueli was a sniper in the elite undercover mistaâarvim unit and had taken part in âdozens of operations to foil terror attacks and crime in the southern region.â He had been dispatched to the Gaza border this weekend to assist the Israel Defense Forces during the clashes along the security fence.

In the attack on Shmueli, as seen in video footage widely shared on social media, a man with a pistol ran up to a small hole in the concrete wall along the Gaza border that Shmueli was using as a shooting position and fired a number of shots through it, hitting the border guard.

Shmueli and an IDF soldier were using the hole in the wall as a sniper position. Around the same time, a group of young Palestinian men also tried to destroy and steal the IDF soldierâs gun, which was poking through the wall, hitting it with a pipe, throwing a rock at it and then attempting to wrest it away.

âThe soldier fought back and prevented the gun in his hands from being taken away,â the IDF said. Later Saturday, the IDF carried out airstrikes on four Hamas weapons storage sites in Gaza in response to the riots and the attack on Shmueli.

At least 41 rioters were injured by Israeli troops during the hostilities, two of them critically, according to the Hamas-run Gaza Health Ministry.

One of the critically hurt Gazans was a 13-year-old boy, Palestinian health officials said.

Defense Minister Benny Gantz told Channel 13 news that Israel âwill not tolerate any harm to our forces. The incidents at the fence are grave and we will respond to them.â

The military said in a statement that soldiers had confronted hundreds of rioters near the border fence in the northern Strip over the course of three hours on Saturday afternoon and evening.

Videos that were streamed by Palestinian journalists at the scene throughout the afternoon and early evening showed hundreds of Gazans approaching the border. Some Palestinians seemed to attempt to clamber onto the fence, while others huddled alongside a concrete barrier.

Gaza factions had organized the Saturday protest in al-Malika refugee camp near the border with Israel as a part of a series of activities to pressure Israel, announcing its plans on Wednesday.

The Israel Defense Forces sent reinforcements to the border on Thursday, though they appeared to have insufficiently anticipated the extent of the violence planned for the weekend.

According to Channel 12 news, Hamas had intended to hold the rally a kilometer (0.62 miles) from the border, but lost control of the crowds who surged toward the fence.

âOur mobilizing masses have come to announce that the path of the Sword of Jerusalem is renewed,â said Hamasâs Gaza deputy chief, Khalil al-Hayya, using the terror groupâs name for the May fighting between Israel and Hamas.

The protest marked the first time Gazans have conducted a daytime march toward the Gaza border since December 2019. A series of demonstrations in 2018 and 2019 â some of which saw Hamas and Islamic Jihad members clash violently with Israeli soldiers â left hundreds of Gazans dead.

The demonstration took place despite a Thursday agreement that would return millions in Qatari subsidies to the Gaza Strip via the United Nations. The agreement was seen as a significant breakthrough in attempts to strengthen the fragile ceasefire between Israel and Hamas.

A few protestors held slingshots, while others burned tires and rolled them toward the border, setting off clouds of smoke. But most of the demonstrators appeared to stay back, remaining a few hundred meters from the barrier dividing the enclave from Israel.

Tensions have risen between Israel and Hamas in recent weeks, as negotiations to strengthen the ceasefire appeared to hit a brick wall. On Monday, two rockets were fired at southern Israel for the first time since the May escalation, allegedly by Islamic Jihad.

For months, Israel and Hamas have held indirect negotiations to lay the terms for a new status quo. In the aftermath of Mayâs fighting, Israel has maintained heightened restrictions on Gaza, significantly limiting imports and exports and complicating the reconstruction of the battered enclave.

Israel also decided to block most of the millions in Qatari cash that entered the coastal enclave every month before the war. Prior to the May escalation, Israel had allowed the money to enter Gaza in exchange for quiet along its southern border.

During the recent 11-day war, Israeli airstrikes and Palestinian rockets caused at least $290 million worth of damage to the Gaza Strip, international assessors reported in early July.

The Israeli government has also sought to condition any easing of restrictions on progress in talks to reach a prisoner exchange with Hamas. The terror group currently holds two Israeli civilians, as well as the bodies of two Israeli soldiers.

However, it has slowly eased restrictions on the Strip as of late, despite an apparent lack of progress on that front, at the behest of international bodies.

Hamas hopes to swap the Israelis it holds for thousands of Palestinian prisoners in Israeli jails. The terror group has repeatedly rejected the Israeli attempt to tie the prisoner exchange issue to Gazaâs reconstruction following the recent escalation.

The first significant progress in the ceasefire talks came on Thursday night, when the UN, Israel and Qatar announced a framework to return some of the Qatari money to Gaza. According to the agreement, the Qatari money will go through the UN before reaching banks in the Gaza Strip.

The Qatari projects in the past funded fuel for Gazaâs only power plant and hospitals to shore up the enclaveâs damaged healthcare system. They also brought in hundreds of millions in cash payments to 100,000 poor Gazan families and to Hamasâs civil servants.

But Thursdayâs agreement will only provide salaries for the poor Gazan families, not for Hamasâs employees in the enclave. And Israel and Hamas have yet to publicly conclude an agreement to ease restrictions on the enclave and allow Gazans to fully rebuild.