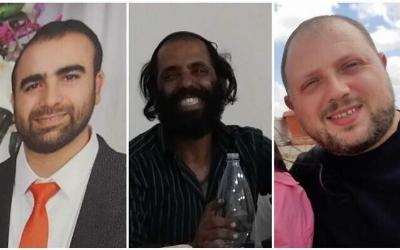 The victims of the Elad terror attack on May 5, 2022, from left to right; Boaz Gol, Yonatan Havakuk and Oren Ben Yiftah (courtesy)

The three victims of the deadly terror attack in Elad were named early Friday as Yonatan Havakuk, Boaz Gol and Oren Ben Yiftah, all young fathers who leave behind 16 children.

The men were slain in the attack that came at the end of Israelâs Independence Day, and followed a wave of terror attacks in Israel and the West Bank in recent weeks, and repeated threats by Palestinian terror groups over the Temple Mount in Jerusalem.

According to eyewitnesses, two terrorists attacked several people with an axe and a knife at a central park and a nearby road in the largely ultra-Orthodox city. At least one of the wounded was in critical condition, and up to seven were hurt in the attack.

Neighbors and friends describe Yonatan Havakuk, a man in his 40s, as someone who always had a smile on his face.

Havakuk, a father of five, worked as a car mechanic in the ultra-Orthodox town.

âHe was a wonderful person,â local resident Yaakov Bar Noi told the Haaretz website, describing how he was known to all as âour brother,â because of his habit of addressing everyone as âour brother.â

âHe always had a smile on his face,â Bar Noi said, recounting that Havakuk would sometimes fix peopleâs vehicles for free if they had financial difficulties.

Havakukâs neighbor, Amir Mizrahi, told the Walla news site that he was killed when he went outside to search for his son.

The second victim of the deadly terror attack in Elad was named as Boaz Gol.

The third victim of the Elad attack was named as Oren Ben Yiftah, a 37-year-old father of 6. Ben Yiftah was a resident of the central town of Lod, according to mayor Yair Revivo.

âWe are accompanying the family at this most difficult time. May God swiftly avenge his death.â

Details on funeral plans for the men were not immediately released.

In addition to the dead, three others were seriously hurt in the attack.

Two victims, one in critical condition and another seriously hurt, arrived at Beilinson hospital in Petah Tikva with head wounds. A third victim in serious condition was rushed to the Sheba Medical Center in Ramat Gan.

Dr. Tzion Zibli, head of neurosurgery at Sheba, said the victim in his 20s was fighting for his life, had a âsevere head injuryâ and was en route to surgery.

Police initially said witnesses told them one of the attackers used a firearm and the other had an axe or a large knife. But MDA said the injuries did not appear to be from gunfire, but from a âsharp implement.â Medics described the attack as a âvery difficult event.â

âA 40-year-old man was lying next to a car on Ibn Gabirol Street with many stab wounds to his body; at that stage we realized he was dead,â MDA medic Alon Rizkan said.

âI continued down the stairs toward the park and found two more unconscious victims lying several meters from each other. Both of them were declared dead,â Rizkan added.

âIn the park, we saw a 75-year-old man lying on the ground, semiconscious, with severe injuries to his upper body. He could not speak and responded with gestures,â MDA medic Idit levy said.

âIt was a very difficult sight, people were sprawled on the road and on the sidewalk from the square to the park, and cries for help were heard from every corner,â Zaka volunteer Aaron Zilberman said.