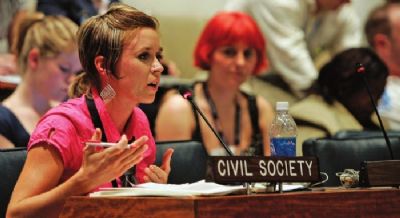 Civil society members at a meeting of the UN NGO Committee (File photo)
A UN committee charged with vetting NGO applications to gain access to the United Nations wrapped up its latest 10-day session on February 8, 2016 having blocked 221 organizations from obtaining participatory privileges. The so-called UN Committee on Non-Governmental Organizations is composed of 19 states, most of which have little to no respect for freedom of speech or association and hinder the operation of independent NGOs. Members include, for instance, China, Iran, Russia, Sudan, Turkey, Cuba and Venezuela. Organizations applying for official UN NGO status are often critical of the very states reviewing their applications.

One of two Vice-Chairs of the NGO Committee is Azerbaijan, ranked by Freedom House as having the lowest status on its freedom index. The 2016 Freedom House report finds elections in Azerbaijan are "neither free nor fair," the political environment is "neither pluralistic or competitive," freedom of the press is "severely" restricted as is freedom of assembly, and "the judiciary is corrupt, inefficient, and subservient to the executive branch." "The country's dismal human rights record" includes "harassment, detention, and prosecution of...civil society activists, and their families..." and, moreover, "regressive laws" on NGOs have meant many have been "forced to suspend operations when their bank accounts were frozen, and in some cases, their offices raided and closed." And yet on February 3, 2017 the Committee chose the representative of Azerbaijan to be a Vice-Chair and Committee Rapporteur.

Turkey was chosen as the other Vice-Chair notwithstanding that Turkey is currently engaged in a vicious crackdown of NGOs. According to the 2017 Freedom House report, the situation in Turkey includes "a state of emergency...mass arrests and firings of civil servants, academics, journalists, opposition figures, and other perceived enemies."

NGOs seek UN accreditation or status because it permits them to attend meetings, to circulate documents, hold events inside the UN and occasionally address UN sessions. Meanwhile, the standard operating procedure of the NGO Committee is to defer applications, session after session, with inappropriate, specious or repetitive questions and demands of the applicant NGO. After years of deferrals, Western states find that if they bring applications to a vote, they are simply outvoted in Committee. Decisions can be appealed to the UN's Economic and Social Council, but are normally rubber-stamped. Currently, the United States and Israel are members of the Committee â but repeatedly find themselves in the minority.

As the January-February 2017 session wound down, Committee members wasted nearly half-an-hour patting themselves on the back for, in the words of the Iranian representative, "a job that should be admired and recognized," while the delegations of Cuba, China, and Venezuela expressed their belief that the Committee was "efficient." Minutes later, the Committee ceased reviewing applications, leaving dozens of NGOs that had applications ready for review hanging until the next NGO Committee session four months away.

Here is a sample of the "efficient" and "admirable" work at the latest session of the UN NGO Committee:


Russian Repression
Russia's main targets for deferral were NGOs critical of Russia's human rights record. Among the 23 organizations that Russia prevented from receiving accreditation by deferral was the Swedish NGO "Right Livelihood Award Foundation." This organization had honored both a prominent Russian human rights activist, and a group known as the "White Helmets" that have accused Russia of war crimes in Aleppo.

Russia also blocked Russian NGOs that had been critical of Russia, including: Also blocked by Russia were two Estonian NGOs, including InimÃµiguste Instituut â deferred for the third time (beginning in February 2016) â which Russia accused of partnering with an individual it alleges to have been involved in a "terrorist attack" in Crimea. The second Estonian organization, an indigenous people's rights organization, Mittetulundusuhing Fenno-Ugria Asutus, was deferred for a sixth time (beginning in June 2014) after Russia expressed concern its activities could lead to "separatism." Several UN member states made an appearance at the Committee session, although not official members and without voting power, specifically to express their support for the organization. This support included Estonia that lamented the "constant loop of deferral," and a representative of the European Union who objected to the "endless procedural measures and political holdups."

Iran targeted and blocked a number of human rights organizations. The "Iran Human Rights Documentation Center," that has been deferred since 2010 by over 60 questions, was blocked by Iran yet again. Initially, Iran posed a question regarding the organization's finances. The United States representative objected, noting that the question had been asked and answered numerous times before. Iran then switched tactics and concocted another question about the organization's "planned projects for 2017." Ironically, during the self-congratulatory conclusion of the review of applications on February 8, 2016, Iran remarked that it did not want to cause "unnecessary problems" or "burdens" on NGOs.

Iran also frustrated the attempts of three women's rights organizations to receive accreditation. On February 2, 2017, Iran blocked the U.K.-based "Women Living under Muslim Laws â International Solidarity Network.," that has been critical of Iran's treatment of human rights activists. On February 6, 2017 Iran blocked "Women's Freedom Forum," an NGO that has been critical of Iran's human trafficking record, and "Women's Voices Now," an NGO that in 2016 screened three short films focusing on the struggles of Iranian women. Iran asked "Women's Voices Now" how the organization ensures that the films it promotes are not based on "fake reports" by "terrorist organizations."

Other organizations deferred by Iran were:

The NGO Committee denied UN NGO status for a U.K.-based organization that works on behalf of persecuted Christians and advocates for religious freedom. "Christian Solidarity Worldwide" had been deferred for 14 sessions starting in March 2010. Since that time, according to the Greek representative, it had been asked over 80 "often repetitive" questions by Committee members.

When the Committee was set to defer the organization for the 15th time after requests for more information by China and Cuba, the Greek representative called for a vote, emphasizing the importance of freedom of religion and the repetitive questions to which the organization had been subject. The Committee voted against status with 4 in favor (United States, Israel, Uruguay, Greece), 11 against (Burundi, China, Cuba, India, Iran, Nicaragua, Pakistan, South Africa, Sudan, Turkey, Venezuela), 1 abstention (Russia), and 3 absent (Azerbaijan, Guinea, Mauritania). Following the vote, an observer from the United Kingdom expressed disappointment at the result, vowing to pursue the matter further in the Economic and Social Council.


The Turkish Crackdown on Civil Society Extends Into the UN

On the first day of the Committee session on January 30, 2017, Turkey alleged that three NGOs that already had UN NGO status were connected to the "Fetullahist Terrorist Organization," an entity that Turkey accuses of being behind the attempted coup in July 2016. Turkish authorities had shut down the operations of each of the NGOs in Turkey, and the Turkish representative requested that the Committee withdraw their consultative status without going through the regular procedures of giving the organizations an opportunity to respond. The United States and Israel opposed Turkey's move, with the U.S. diplomat expressing concern over the crackdown on civil society in Turkey.

Ultimately, several votes were held on Turkey's highly unusual move that culminated in the withdrawal of accreditation for all three NGOs. The United States had requested postponing consideration of withdrawal of status from the three NGOs in order to provide them time to respond to the allegations, but was outvoted with only 2 in favor (United States, Israel), 14 against (Azerbaijan, Burundi, China, Cuba, Guinea, India, Iran, Mauritania, Nicaragua, Pakistan, South Africa, Sudan, Turkey, Venezuela), 2 abstentions (Russia, Uruguay), and 1 absent (Greece).

Votes were also held regarding whether the Committee was required to attempt to contact the NGOs about the decision to withdraw accreditation, and thus provide an opportunity to respond. The Committee decided against informing the NGOs by a vote of 13 in favor (Azerbaijan, Burundi, China, Cuba, India, Iran, Mauritania, Nicaragua, Pakistan, South Africa, Sudan, Turkey, Venezuela), 2 against (United States, Israel), 2 abstentions (Russia, Uruguay), and 2 absent (Greece, Guinea), effectively preventing the organizations from being able to dispute the allegations by the increasingly repressive Turkish authorities.

One of the organizations, the "Journalists and Writers Foundation," was not even operating from Turkey, but had moved its headquarters to the United States. Nevertheless, its accreditation was withdrawn by a vote of 16 in favor (Azerbaijan, Burundi, China, Cuba, Greece, Guinea, India, Iran, Mauritania, Nicaragua, Pakistan, Russia, South Africa, Sudan, Turkey, Venezuela), 2 against (United States, Israel), and 1 abstention (Uruguay). The Committee also voted to recommend withdrawal of status for "Kimse Yok Mu" and "TÃ¼rkiye İşadamlari ve Sanayciler Konfederasyonu," each with a vote of 16 in favor, 2 abstentions (United States, Uruguay), and 1 absent (Israel).


The Battle to Erode Protection Measures and Transparency
A recurring theme of the session was the battle over procedural rules and transparency â like the one denying the three Turkish NGOs an opportunity to respond to a decision to withdraw accreditation. In that case, the governing rules say specifically: "In cases where the Committee on Non-Governmental Organizations has decided to recommend that the general or special consultative status of a non-governmental organization...be suspended or withdrawn, the non-governmental organization concerned shall be given written reasons for that decision and shall have an opportunity to present its response for appropriate consideration by the Committee as expeditiously as possible."

A particularly heated battle occurred during a "Q&A" session, where NGO representatives can appear in person and answer questions before the Committee. The Committee has had a practice of using video screens to display the NGO representatives and the Committee members posing questions. The images are not broadcast beyond the UN premises; the only people who are able to see the images outside the room itself are UN employees with local feed within the building. While many UN meetings are publicly webcast, NGO Committee meetings are not. At this session, however, China demanded that the screens at the front of the room be turned off. No reason was provided. This led to an extended debate involving occasional shouting matches among Committee members. In the end, despite the efforts of the United States, Israel, Greece, and Uruguay, the other fifteen Committee members succeeded in having the video terminated. Only a text of an application on the screen was subsequently permitted.


Other lowlights of this session of the NGO Committee
On February 21, 2017, the Committee will hold a final meeting to adopt the report of the session.


Success Rates of NGOs Based in a State Represented on the NGO Committee*
*There were no applicants for accreditation from Azerbaijan, Burundi, Cuba, Nicaragua, Uruguay, and Venezuela. Bear in mind, that NGOs from repressive states are often not truly independent â but instead are so-called "GONGOs" or government-organized NGOs.